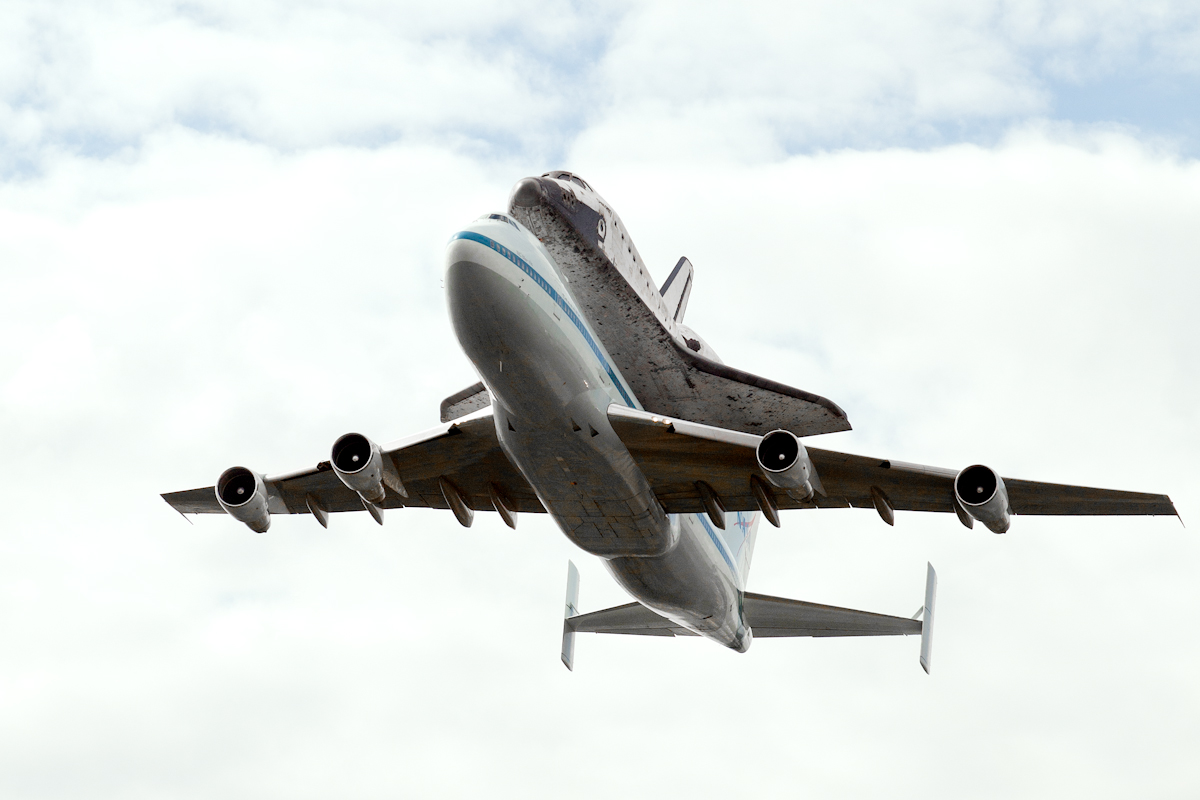 Today was the final flight of Space Shuttle Discovery.

Piggybacked (well… technically “mated” with o__o) on a modified Boeing 747, Discovery left Kennedy Space Center at daybreak and made a journey around D.C. before finally landing at Washington-Dulles International Airport. Discovery‘s final destination will be in the most excellent Smithsonian Udvar-Hazy Center where it will replace the Space Shuttle Enterprise (which had actually never been in space… long story).

I arrived at the Udvar-Hazy Center around 8:30 a.m. and joined a crowd of fellow admirers. OV-103 had flown 39 missions, starting with STS-41-D in 1984 and ending with STS-133 in 2011. The shuttle was slated to arrive between 10 and 11 a.m. but the area was already filled with a silent buzz of anticipation. There were a number of news crews and a helicopter which many of the younger children mistook for Discovery itself.

At 9:43 a.m. Discovery appeared in the distant sky. I heard the gasps and shouts well before I could see the craft itself. After about ten seconds of drop-jawed viewing, it disappeared behind the Center’s main hangar.

I would guess that approximately five minutes passed before any of us took another breath. Would Discovery be coming back? Would it actually come… within an appropriate viewing distance?

We didn’t have to wait much longer.

At 9:49 a.m. we saw Discovery crest the treeline and come straight at us. Any question of how close it would come washed away in the roar it made as it flew through the sky directly above us. It was surreal. I felt like I could almost reach out and touch it. The Discovery, the only shuttle to have flown in space my entire life was on its final flight right above me. The rush of emotion and exhiliration was immeasurable.

I would like to share a photo and link to a wallpaper for all of you who still believe in the wonder and possibilities of outer space.

Click here for the image in full size and say hello to your new wallpaper!